Thank you!
Someone from our team will reach out to you shortly about scheduling your free consultation.
Oops! Something went wrong while submitting the form.

We look forward to meeting you!

Mr. J. Christopher "Chris" Geiger was born and raised in Savannah, where despite hundreds of great restaurants, the best food can still be found at his Mom's house. He earned his BA in English at Mercer University and followed up with his JD at Mercer's Walter F. George School of Law in 1981. He began his career in private practice in June of 1981 in Canton. Chris began to specialize in real estate/secured financing when the real estate boom of the 80’s, spurred by the opening of Interstate 575, transformed the Cherokee County economy from agricultural to suburban. He represented community banks and mortgage providers in meeting the demands of acquisition and development loans for local developers, construction loans for the home builders, and mortgage loans for the ultimate buyers. Commercial lending followed the new home economy, and more complex secured financing arrangements between lenders and borrowers were required. A few recessions over the years brought on the need to address loan workouts, loan modifications, and foreclosure issues with his lender clients.
Learn more about Chris

Mr. Andrew Cason “Casey” Geiger is a native of Cherokee County, Georgia and graduate of Cherokee High School. For most of his career, Casey Geiger has practiced large scale, high stakes personal injury and product liability litigation in both Federal and State Courts in Colorado. Casey has successfully litigated cases to juries, and obtained millions in settlements for his clients. While in Colorado, Casey worked as one of the lead attorneys in a product liability case involving the Wright Medical Profemur modular hip implant, obtained large settlements for clients using the defective products and pharmaceutical drugs, and represented hundreds of individuals who were seriously injured in motor vehicle or trucking accidents.
Learn more about Casey

Nancy Griffin is a native of Cherokee County, Georgia and graduate of Cherokee High School. Nancy Griffin began working with Geiger Legal Group at an early age. Through her high school’s business work program, Mrs. Griffin teamed up with Chris Geiger and she was trained in all aspects of real estate matters. The valuable experience with Chris during her high school years helped her find a job she truly loves. Mrs. Griffin officially joined Geiger Legal Group, LLC in 2000 as a full-time paralegal, focusing her practice primarily on real estate transactions. In her eighteen years at the firm, Mrs. Griffin has helped hundreds of individuals buy or sell their home.
Learn more about Nancy 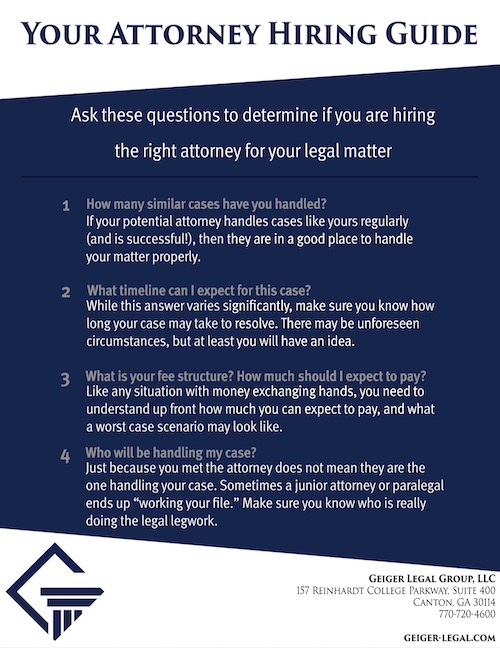 Hiring an attorney doesn't need to be scary. Here are a few tips to help you find the right attorney for you.

*Downloading does not create an attorney-client relationship*